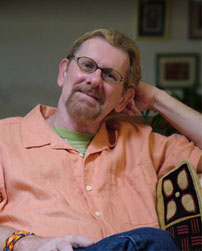 Picnic 2010 featured reader Wayne Crawford, travels north to Mountainair from Las Cruces NM, where he is beyond merely "active" in state and area poetry scene. He has had scores of poems published in literary journals and magazines, founded the online journal, Lunarosity (2001), and serves as co-managing editor of the annual southwest anthology, Sin Fronteras/Writers Without Borders Journal. Publications include print and audio: a poetry book, Sugar Trail (2007), a music with spoken word recording, Oasis Bound (March 2009) and a CD of poetry, Wayne Crawford Reads (Vox Recordings (October 2009), and a forthcoming book of poems, Dancing Skin.

Superman .... of course. I've written a series of poems about him. Here's one that listeners always seem to enjoy.

Clark Kent Takes Off....
Sunday night is the time he colors his hair.
He’s tried for years to undo the callick
that twists his hair into one big curl
on his forehead, but thinning, trimming,
graying and spraying haven’t loosened its grip.

Last year, the x-rays began blurring a little.
He could still see the big picture
but the little things weren’t so keenly
recognizable--pocket knives, for example,
or a stolen key in a breast pocket. He needed
to wear prescription glasses
to read fine print. And the glare of lights
during night flying had never been worse.

He was fine in the air but lift-offs and landings
--painful! Doctor attributed arthritis
to his arches. Of course, the doctor
didn’t know about Mr. Kent’s secret life,
the burden he placed on his feet, bounding
into space, lifting the weight of the world,
constantly landing on surfaces meant
for rubber tires.

You’re strong as an ox, his doctor said.
Fundamentally, there’s nothing wrong
with your body, nothing except your nerves.
Your nerves are like steel. You mustn’t give
all of your energy to The Daily Planet. Keep it
up, even your strength will dissipate.
You must listen, Mr. Kent. You must relax.

This evening’s news headlines
reported a crime spree in Metropolis.
I probably shouldn’t reveal this
but Superman woke up today, massaged
his feet, and went back to bed.

Links: more poetry by Wayne Crawford to read and listen to

Posted by Vanessa Vaile at 5:36 PM