…farewell then, behind on other NMpoetry posts mailbox & reader folders but not missing this last EoE post opp…apologies to the ever deferred (sounds better than overlooked or left behind)

It is coming to pass, another historic and largely underground grassrootz venue in Albuquerque brings a good run of efforts to completion and hands the space back to the stuff of legend. Mitch Rayes has deemed it time to say “Toodle-oo” to the Projects—and yes, “toodle-oo” is his word and his spelling. In June, he’ll be moving into quieter abode, hopefully finding a way to dedicate more of his time to his own writing.

SO at 7:00PM  on Monday May 27th at 3614 High Street NE (east of edith, just north of Candelaria, through the open garage doors), we will celebrate the  final East of Edith reading at the Projects. This one will be a special celebration party to thank Mitch, as well as all our readers and features and hosts and collaborators. It’ll be a potluck, so we will  eat and talk and share poems and generally enjoy one last good gig at the space....and then close with a bit more music…

Mitch’s own legacy in the ABQ arts community is huge. His work goes way back, including efforts in the early nineties with an organization called Flaming Tongues. He produced four extremely successful Albuquerque Poetry Festivals  with Juliet Torrez and others, and for years published a monthly newsletter of lit events called the Tongue [and much more]

LPG will  continues in ever-shape-shifting form (more on that later), but this Monday is when we get to say goodbye and thank you... As Mitch says, “On more than a hundred nights, I opened the doors, and every time, words and music filled the place to spilling over.  Thanks to all of you who made this happen.  We’ll gather downstream at the next pool.” Swim.  –lg

Read all (not just parts) at The Wooden Mallet and the Toodle-oo: Last (ever) EoE
Posted by Vanessa Vaile at 4:27 PM No comments:

Posted by Vanessa Vaile at 1:43 PM No comments:

from NM State Poetry Society president Shirley Blackwell, via Paul White,   Santa Fe Poetry and Prose Meetup Group
It pays to be an NMSPS member: Check out this scholarship offer for NMSPS from Tupelo Press

Members,
The Conferencia del Encanto (registration form here) has captured attention across the country. In support of our efforts to host the Convention, Jeffrey Levine, owner of Tupelo Press in Massachusetts, is offering $300 scholarships to Tupelo Press' upcoming poets' conference in Truchas, NM (between Santa Fe and Taos) to the FIRST TWO NMSP MEMBERS WHO QUALIFY. You can check out this conference and the preparatory session for it here.

The Truchas conference will be led by Jeffrey and our own Veronica Golos, the Walking Rain (Taos) chapter member who is presenting one of our June National Convention workshops in tandem with member Bonnie Rose Marcus, events director at Poets & Writers. Applicants for the Truchas events, which occur June 18-21 and 21-24, will be asked to submit 5 poems to Tupelo Press, and Jeffrey Levine will use them to select TWO NM SOCIETY MEMBERS TO WIN THE $300 SCHOLARSHIPS. Jeffrey is flying in on June 16 to announce the winners at the Conferencia del Encanto's Gala Banquet that evening Tupelo Press publishes about 40 titles a year from top notch authors, so this is an opportunity to meet an East Coast publisher of note.

The deals don't stop there, however. Jeffrey will be sending me--for our Conferencia del Encanto hospitality bags--200 coupons, each of which offers a $100 DISCOUNT ON FUTURE Tupelo Conferences. These coupons go to the first 200 Federation members who register for La Conferencia del Encanto. I am letting NMSPS members know about this before I tell the rest of the Federation. Right now, we have 120 registrants for the Convention, and the pace of registration is picking up. The rest of those coupons will go to the next 80 who register, and I would like for that to be you, members of the hosting Society.

So, New Mexico members, if you have been waiting to register--this is reason not to wait any longer.

I will send this notice to the National Federation officer in charge of Conventions on Friday, and if he is true to form, the message will go to all the other State Poetry Societies on Saturday.

I wish all of you the best of luck and good poetry
Shirley Blackwell, NMSPS President

Posted by Vanessa Vaile at 3:19 PM No comments: 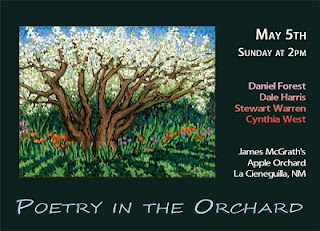 Wanted to let you know about a delightful poetry reading today, Sunday May 5, 2 - 4 pm at James McGrath's Apple Orchard in La Cieneguilla. just south of Santa Fe. I'll be reading from my new book "Dream of Dragonfly" accompanied by Ingrid Burg, flute maker extraordinaire, for some of the poems.

Other featured poets are Daniel Forest , Stewart Warren, and Cynthia West, with music by Dogstar (Lou Blackwell, Greg Candela, Debbi Miller-Gutierez & Stewart Warren.) James has been hosting poetry readings in his orchard for many years. It is a beautiful spot and a pleasure to be there in such good company.

For driving directions and more on the poets, please go to Stewart Warren's Poetry in the Orchard page. "Dream of Dragonfly" is for sale online at Amazon and the Create Space as well as from my backpack when we see each other around town!

Posted by Vanessa Vaile at 8:26 AM No comments: