Maria L. Leyba is a native New Mexican who still resides in her childhood home. She lives in the barrio of Barelas. Family & her barrio are the inspiration for her poetry & literary works. She has been published in several anthologies, written several chapbooks & hosted many poetry venues. 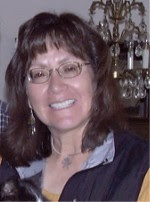 He Forgot We Were Children

Snap in the Twilight

I dreamt of 40 peace doves
growing out of my brother's hands
a poor barrio boy
whose fingers glowed with peace
a human bird feeder
soothing collecting humanity's despair
breathing hope of salvation
into lives of our gente
I wake up to a symphony of birds
my mind glows with sweet memories
of my brother's borrowed peace
a boy who lost his life in Viet Nam
today on the eve of my birthday
my world is blooming with
his peace / hope.

His barrel chest collapsed
holding his once
radiant hopeful heart
he the young warrior
returning from World War II
his hands still burning
from holding her tiny waist
twirling around the dance hall
in a dusty border town.
War buddies called him, "Chief"
now he was weak / his knees buckled
staring into her blue eyes
sparkling like stars
dreaming of waking up every day
stroking her soft blond curls
he wooed her with his best English
hoping it didn't sound too broken
when the final dance was over
nervously she told him
"Perdon, pero no hablo ingles."
I don't speak English
he didn't know she had
already fallen in love
with his jet black eyes / his
velvet bronze skin
dreaming of the brown children
she had always wanted.

Posted by Vanessa Vaile at 5:06 PM No comments:

PWP is poetry and more always music too. Poetry can not be separated from music any more than the dancer from the dance. If you attended last year, you'll remember Bud & Jessica, the Blue Rose Ramblers. If you missed them last year. you're in for a treat... 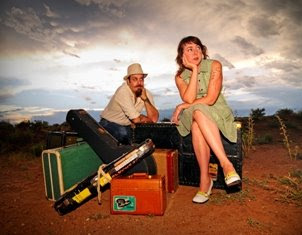 Photo by Wes Naman
Thanks much, and see you in August!
Jessica Billey

Blue Rose Ramblers is a violin, banjo, and vocal duo that performs old western ballads, swing favorites, and jazz classics. Jessica Billey and Bud Melvin live in Rio Rancho, NM, and can be seen locally and nationally in a variety of musical ventures.

Along with Blue Rose Ramblers, some of their current projects include the Grave of Nobody's Darling, an alt-indie rock band; Bud Melvin on solo gameboy banjo music; and Lionhead Bunny, an improvised experimental live soundtrack project.

Visit www.blueroseramblers.com and www.myspace.com/blueroseramblers for songs, pictures, and more info.
Posted by Vanessa Vaile at 8:45 AM No comments:

Poetry Daily snippets. This is the one at http://poems.com -


Poetry Daily is an anthology of contemporary poetry. Each day, we bring you a new poem from new books, magazines, and journals.


Poems are chosen from the work of a wide variety of poets published or translated in the English language. Our most eminent poets are represented in the selections, but also poets who are less well known. The daily poem is selected for its literary quality and to provide you with a window on a very broad range of poetry offered annually by publishers large and small. Included with each poem is information about the poet and the poem's source.

Our purpose is to make it easier for people to find poets and poetry they like and to help publishers bring news of their books, magazines, and journals to more people.

Poetry Daily is a publication of The Daily Poetry Association, a not-for-profit charitable corporation under section 501 (c) (3) of the Internal Revenue Code.


RATTLE Poetry Prize
The 2008 RATTLE Poetry Prize offers $5,000 for a single poem, plus ten honorable mentions of $100 each. All 11 winning poems will be published in the winter issue of RATTLE. Additional entries are frequently offered publication as well. Judged in a blind review by the editors to ensure a fair and consistent selection, and with an entry fee that is simply a subscription to the magazine, the RATTLE Poetry Prize is designed to be one of the most writer-friendly contests around. Deadline: August 1st

Poetry News Links
News and reviews from around the web, updated daily

Turns out there is another Poetry Daily (http://poetrydaily.com), ad supported, selling "poetry related products," and owned by Syndicated News Network. Does this mean Williams was right about poetry being news? Ads tell you to "write poetry and earn," browse eBay for love poems and download poetry writing software. Self-described ad "News, Blogs, and Videos featuring Poetry and Poets around the globe," a disclaimer advises, "We are not responsible for the views and opinions of external websites," which make up most if not all site content.

Posted by Vanessa Vaile at 11:55 AM No comments:

The History of Spoken Word

alternately, an early forerunner of the Poets & Writers Picnic (complete with food and live music) ...