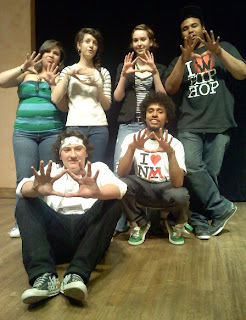 Faustino
I like to include featured reader samples - usually poems - with introductions, but video, not text, is the medium for getting acquainted with this group. Let them speak for themselves:
ABQ Slammaster Kenn Rodriguez sent me the group picture above (I take responsibility for any misidentification) along with a note about the team, Youth Slam-off and the Albuquerque youth slam scene,

Posted by Vanessa Vaile at 2:35 PM