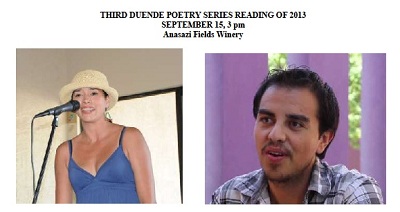 The Duende Poetry Series of Placitas, now in its 9th year, sponsors four readings a year and the third reading of 2013 will be held on Sunday, September 15 at the Anasazi Fields Winery in Placitas, at 3 pm. The featured poets will be two noted Albuquerque poets, Damien Flores and Jessica Helen Lopez.


…member of the 2004, 2006 and 2008 Albuquerque Slam Poetry Teams and also of the 2006 and 2008 national champion UNM Slam Teams. He was also the champion of the Albuquerque City Slams (2008). Flores has published two books: A Novena of Mud (poems) from Destructible Heart Press, and, El Cuento de Juana Henrieta from Culture Lab Press. He was named "Poet of the Year" in 2007 and 2008 by the New Mexico Hispano Entertainer's Association and also won the UNM Todd Award for creative non-fiction in 2008. He holds a BA in English and Chicano Studies from UNM, and currently is a teacher. He also hosts the weekly Spoken Word Hour on KUNM-FM. He has also published his poems in Duke City Fix; Malpais Review; De Veras: Voices from the NHCC; Earthships Anthology;2006 National Poetry Slam Anthology; A Bigger Boat Anthology; the Underground Guide to Albuquerque & The Daily Lobo.


…a four-time member of the Albuquerque City Slam Team and also was a member of the 2008 championship UNM Lobo Slam Team. She has been the "Poet-in-Residence" at several New Mexico High Schools and continues her work in the classroom. Her poems have been published in the Bigger Boat Anthology; Chicago Open Mic America Vol I; Feminism Now; Poetry Diversity; The Pedastal; Adobe Walls, Malpais Review; Blind Oracle; and she was the co-Editor of the Earthships Anthology. She is also the author of a book of poetry, Always messing with them boys from West End Press.

For all Duende Poetry Series readings wine, free snacks and non-alcoholic drinks are available to the audience. The event is free, although we encourage donations for the poets (donation jar as you enter). For more information, contact Jim Fish at the winery at fish@anasazifieldswinery.com, or 867-3062.