Hey, poets. To place your poem in the Poetry Anthology, which is cataloged in the Occupy Wall Street library and maintained by the Occupy Language (formerly Occupy Poetry) group . . . email a poem (attachment fine) to Stephen Boyer at stephenjboyer  [@]  gmail. com. 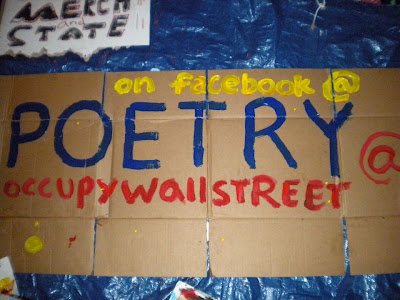 You will receive an automated response. Like everything else I've seen at Zucotti Park, the project is extremely well-organized. You can trust your poem will be included. Right now the Anthology is organized in binders, by week. Portions or all will or probably will migrate to the Web.
Occupy Language is also defining its Dissemination Project. One member showed us origami-like handouts with word placements (on it). Some members have/will read to each other on a subway or bus.

Their choice of text. Yesterday there was a marathon reading of Bartleby the Scrivener in an indoor galleria/coffee place with tables (I cannot find the noun) in a big bldg.  at 55 Wall Street about seven
blocks from the park. No mic. (No mic, to keep it from being shut down, not that Police Commissioner Ray Kelly has a stated aversion to Melville but you never know.)

The Poetics List is moderated & does not accept all posts. Check guidelines

Posted by Vanessa Vaile at 6:14 PM