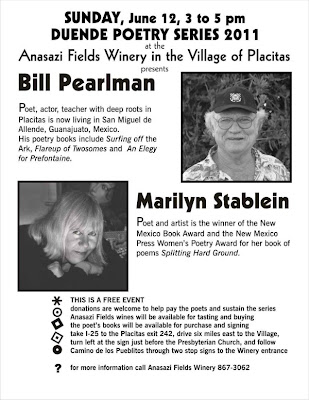 click for larger view
The Duende Poetry Series (which really should have its own page if only a quickie setup on Facebook) puts on four poetry readings a year, one each season of the year, for the benefit of the community of Placitas and open to the general public. For information, contact Jim Fish 867-3062 or online at the Anasazi Fields website.
I'm still trying to figure out who I have to kill, blackmail or otherwise extort to get on the direct mailing list. Fortunately, it's more pebble in the shoe minor annoyance than real problem since I am on the mailing lists of a number of lists that are. Downside though is that it ups the likelihood of the event not getting the in-depth coverage it should.
The next reading in the series will be on Sunday, September 11, featuring Puerto Rican poet/ musician/ painter Alvaro Cardona-Hine and Taos poet and community activist Amalio Madueno.
Keep an eye out: the virtual Picnic plans to do its own thing by posting, pre-reading, poems and whatever from featured readers at Duende and elsewhere ~ whether as enticing trailers or substitutes for attending for those who (like me) cannot be there in person.
Now, if only event organizers would take a leaf and learn from slammers and video more readings or even just do the PennSound thing and record them. The Local Poets Guild Audio Archives is already setting an example on the audio front.
Posted by Vanessa Vaile at 8:40 AM