Just the poems themselves - and their distinctive form, minus lengthy explanations, lead ins. Perhaps a few links at the end. 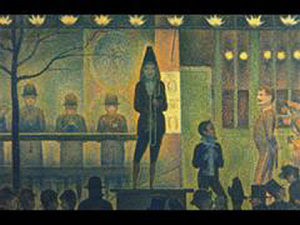 Tony Leuzzi, Fibonacci poet and friend from graduate school days at University of Louisiana-Lafayette, writes, teaches and gardens in Rochester NY. If his name seems familiar but you cannot quite place him, that may be from having read non-fib poems published by Dale Harris in her a monthly poetry journal, Central Avenue. I have admired Tony's poetry, essays, reviews and interviews and enjoyed reading, rereading and teaching his poetry: I am pleased to be sharing his work here.

It
had—
as I
remember—
just finished raining
when I saw them in a meadow
nosing the wet, saw-toothed leaves of purple coneflowers.

Six
or
seven
of them tread
the stippled path light
dipping their brown, velveted heads
to green, abrasive tongues that cupped the fallen water.

And
I—
tense as
the unplucked
string on some guitar—
marveled at their movement, which was
clear and fluid, a graceful pouring forth, like water…

In
the
panel
on the left
a woman opens
wide her arms, tilts her head back, sees
a beam of dusty light pouring pale gold into frame.

(But
what
is light
if not the
inverse of the dark?
Between extremes there is a hinge—
another name for wing or bridge—an edge and center.)

In
the
panel
on the right
a woman closes
arms like gates before her, lowers
eyes to scrutinize white floorboards shadowed by her feet.

The
point
is not—
contrary
to common belief—
whether or not one can repeat
a sequence of deceptively simple instructions,

or
test
one’s strength
by placing
the self in absurd
even degrading positions
to appease the fatuous whims of authority.

It
is
rather
a fine art
by which one appears
to be bound to the rules while still
infusing each charge with a subtle flame of protest.

Publications: Tony Leuzzi's verse, book reviews, essays, and nonfiction have appeared or are scheduled for publication in various small press and academic journals, including Double Room, Arts and Letters, California Quarterly, Fox Cry Review, Rhino, Shiny, The Harvard Educational Review, Sage and others. The author of several chapbooks, his first full-length book of poems, Tongue-Tied and Singing, was published by Foothills Press in 2004. Currently, Tony is interviewing a wide range of American poets about their understanding and use of traditional and/or organic forms that he plans to publish in book form.